Team Canada takes the first from the series

Great match at Škoda Icerink. Canadians shows how great skaters are and gives no chance to Fanklub Lev Praha and their friends

Letourneau & Lenzi (CAN) / Marina & Stanovsky (LEV) stars of game no:1 of Prague Series 2018 with Team Canada

Game start was postponed due to the late arrival of Team Canada. But they proved their speed already in the locker room. Dressed up the hockey gear in a couple of minutes and game started with the national anthems and shake of hands. Pure spirit of friendly match right from the begining.

So quickly started guys in white jerseys with maple leaf and scored after five minutes of the game. Letourneau hit the top shelf and send the team ahead. Lev tried to equalise but only few players really shows activity. Marina with no 8 was the only one in the first period who tried to be creative. So that ended up in the second goal of Team Canada Louis-Philippe Naude set up well a chance for Victor St.-Laurent and for him it was easy to hit the open net. Michal Kušnír in the Lev crease had a tough time during first period because of 16 shots were released by the Canadian guys. And even worse it was, after the technical mistake of Lev player referee gives another chance with the penalty shot against Kušnír. Dana Ilic did a great move and used this chance without any doubts. 3:0 after the first period.

A little bit of better gameplay by Lev in the second period. Halota and also Smutek tried to bring some good moves, but always prepared defense of Team Canada stoped their chances. And if there was a possibility to shoot the puck, the Canadian goalkeeper Cocirian was focued and ready to block or catch the puck. In the middle of a second period after the tripping of one of the Canadian player the smallest player of Lev Praha had a chance to score in the penalty shot, but did not succeeded. Cocirian still protecting the shootout on his side. Before the end of this period another nice action was seen by spectators at the Icerink. Tamas Tancos used perfect pass from Letourneau and scored the goal number four.

Start of the final phase was again under the control of Canadians. One touch action started by  Letourneau and Dalkiriadis was turned into the fifth goal by Urban Robar. Canada dominated this game and may be slowed down a bit after their fifth goal. And Lev used this opportunity and scored thier first. David Stanovský close in the goal area finds the loose puck and finished the action started by Šimek and Rus. So it was much better for home team and couple of minutes it seemed like this team can fight. And the activity brings for the Lev team another one. Alexandr Horký fired one perfectly. In this moment the game was 5:2 for Canadians and Lev felt the chance to make a drama. But in couple of minutes was all over. Canada again switched their engines to the higher level and scored two fast goals. Nice try of Mladenov finally ends behind Kušnír's back and as well Romain Massicotte finished his job and scored the last goal number 7 for team Canada.

It was a great game for all guys who participated and no matter who scored more.. All guys on the ice are winners!

Full foto story of this match is here 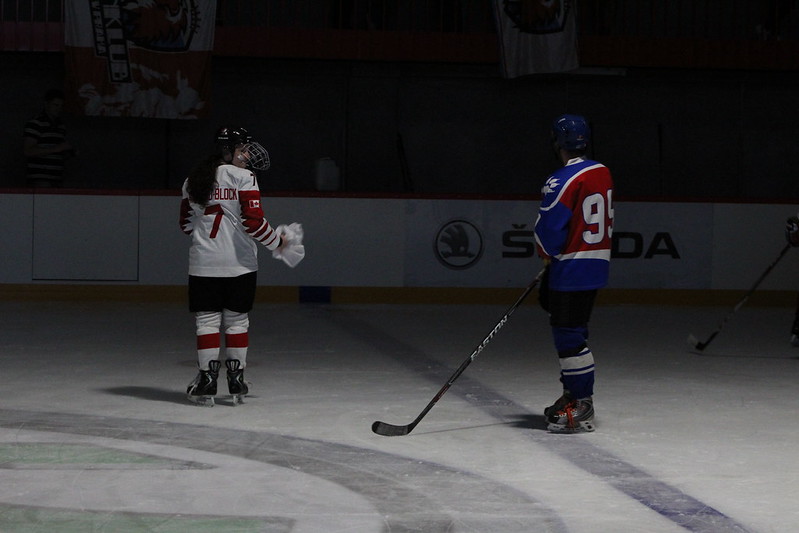