Second game of the Prague Series was different. Canada hit the net first, but Prague stars find the way how to beat the great Canadian defense a ties the series to fair 1:1

4 penalty shots but no goal! Kušnír (LEV) only one puck behind his back. Great performace of Hazboun and Raymond-Block (both CAN). Halota (LEV) almost hattrick

The start of the game was so simillar as the last game finished. Canada skates much better and had couple of nice chances even the team of Lev Prague and Friends was much stronger than in the previous day. And good start resulted in the opening goal for Team Canada. Nice colaboration of Dalkiriadis and Naud right between the circles. Canada got the lead and Lev team must to be much more concentrated. Guys in red started to skate much better and fired good shots to the big and great golie Cocirian. The equaliser come close after the wake up of Lev Prague. Křivský managed to send puck behind the Canada goal line and there was a great work of his budy Vitovec and captain Šimek Jiří. Game tied, but a chace for Canada in the first period. Kušnír faced another penalty shot. But Ilič ended this try with no success. Still 1:1 and great combination from "Gretzyk office" Urban found uncovered Schieffner and it was piece of cake for him. Lev first time ahead in the series. This pump the optimism into the veins of guys in red and they started to be better at the end of the period. Also after the faul of Canadian defender penatly shot was called by referee Tomáš Výborný. Marina was asked to execute this penalty shot instead of her teammate. She tried nice move but again not result in goal.

Last chance what was finished with goal was nice combination of 3rd line of Lev Prague. Křivský from left board passed soucer pass into the crease area and there was ready stick of fast Vitovec who net the third goal of home team.

In the second phase of the game Team Canada started their way to makes the gime tied. A lot of shots and dangerous actions was seen, but Kušnír even with the injury in lower body keep his net safe. But because of the more offensive activity of Canadians the open doors in their own zone was opportuntiy for skilled snipers of Lev Prague. Hrabánek hit the spot and sent his team to three goal lead. Later on in the middle of the period Hrstka sent the puck from blueline and the puck was touched by the Canadian defender so Cocirian wasn¨t able to react for the change of the puck direction and it was goal number five in the Canada net. Great activity first line in red jerseys brought another goal. Defender Halota was found by Mihál and there was a restful lead for team Fanklub Lev Prague after two periods. The scoreboard showed 6:1 before the last.

After the zamboni did the job last period started, but the game was not smooth as in the first two. Players didn't passed well on both sides and start of the game wasn't the nicest part of the series. But after the half of the period all started to be better again. There was another penalty shot for Marina from Lev. She replaced Najberk who rather rest after the accidental hit to his mouth. Marina tried a little bit different dangle, but Cocirian gives no chance to the beauty in red jersey. Hrabánek who was one the fastest on the ice scored a goal, but was disallowed by referee because of kick motion. So still the game was 6:1. Letourneau had a great moment and on his stick was a goal, but Kušnír was excelent again so Canada had no luck in this game. Also in good chance was little but excelent skater  Bianca Raymond-Block but it was finally again blocked by Kušnír who may be had his game of season.
After he managed to give no chance in another penalty shot agains him he was for sure selected as one of the stars of the match. Last goal was scored by always smiling Halota who used the pass from Urban and hit the far side of the net from the circle. So finally the game was 7:1 for home team so the Prague Series with Team Canada is 1:1.

Full foto story from the match is here 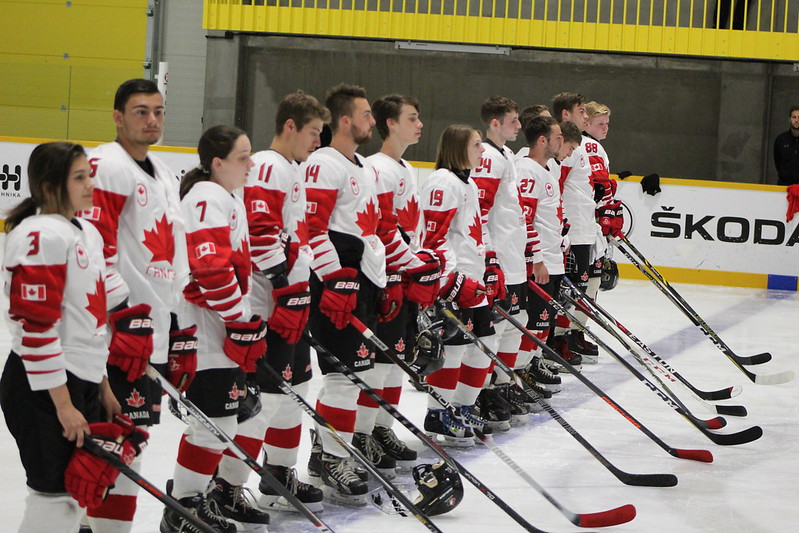